MUMBAI: Indian singer and television presenter Diljit Dosanjh has postponed a concert in Houston scheduled for next weekend after it emerged that the organizer was a Pakistani man.

The 35-year-old singer is currently on a concert tour of USA and posted a statement after a film body asked the Ministry of External Affairs to cancel his visa.

Diljit said in his statement that he had ‘just become aware’ of the film body’s letter and that his contract for the concert tour is with an agency called Shri Balaji Entertainment.

“I have decided to postpone my Houston show at this time. I love my country and will always stand for the greater interest of the nation. India always,” Diljit Dosanjh said. Read his statement here: 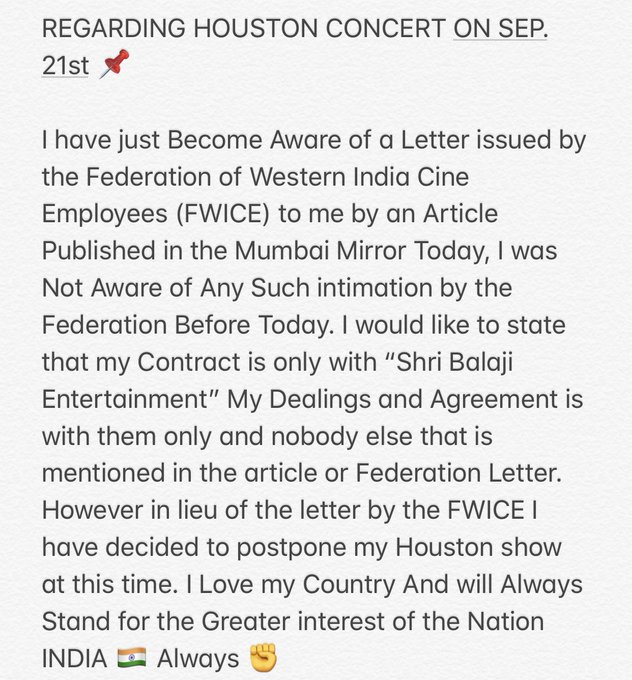 According to a report carried by NDTV earlier this week, the Federation of Western India Cine Employees or FWICE wrote a letter to the Ministry of External Affairs saying Diljit Dosanjh would be performing at the invitation of Pakistani national Rehan Siddiqi and would ‘set a wrong precedent in view of the current alarming situation between the two countries.’
The letter asked that the singer’s US visa be cancelled, saying he he has been allured by the Pak National, Mr Rehan Siddiqi… It is therefore our humble request to you to cancel the visa of Mr Diljit Dosanjh and his troupe or the application for visa not be granted to restrain their performance in America as it will be labelled anti-national.”
“We are doing our duty and wish the government take appropriate action. We hope you will do the needful to crackdown the menace to avoid the devastating effects,” the letter read.
entertainmentHouston concertIndiaPakistansinger
0 434
Share FacebookTwitterReddItWhatsAppPinterestEmailLinkedin

HBO orders new ‘Game of Thrones’ series as it scraps another

Indian film actress, newborn die due to unavailability of ambulance

Tabish Khan expresses his desire to represent Pakistan in…